Bhubaneswar: Exams are always dreaded by students. And this time it’s doubly so for students of Classes IX and XI in ICSE schools of the Odisha capital.

An anonymous letter from a Class XI student of Stewart School, Bhubaneswar, triggered a debate on the decision of a few institutions to conduct offline exams immediately after reopening of schools.

On February 1, the Odisha government allowed resumption of physical classes for Classes IX and XI from February 8. Schools across Odisha had been closed since March 2020 in the wake of the COVID-19 pandemic.

The government had advised that classes will continue for 100 days before annual examinations are held in the last week of April. However, ICSE schools in the city are keen to complete the exams by February-end as they have to start the next academic session from mid-March through the first week of June, .

“The school gave the time table for conducting online examination a few days ago but suddenly it changed decision and sent a message that there will be offline exams,” the student wrote.

The student contended that if the school authorities were keen to conduct offline exams, they should have provided enough time and allowed physical classes in accordance with government guidelines.

According to the time table available with the web portal, the school is holding online exams for classes IX, VIII and VII. 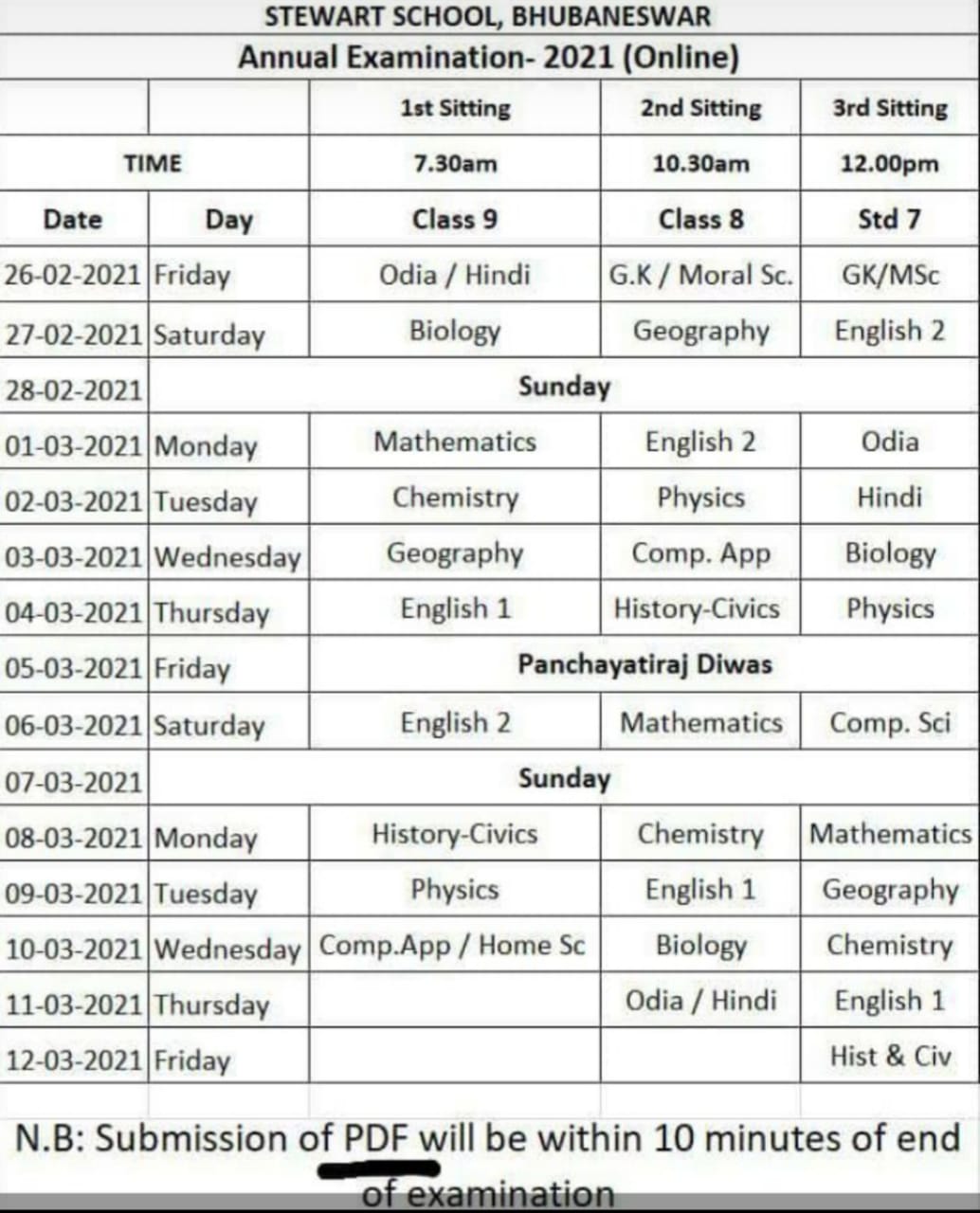 When contacted, Stewart School Principal Rashmi Senapati refused to comment on the issue.

Odisha Bytes spoke to parents and students of a few other schools to understand what they think on the issue.

A Class IX student of Loyola School, Bhubaneswar, told the web portal that students do feel the need for physical classes before the exam. “It will be unfair for students who have studied during the lockdown if the exam is held online as everyone can then cheat and write. Physical classes would have, however, helped students to clear their doubts and understand the exam pattern better,” said the parent of the student.

Loyola has scheduled its exam from February 22.

A student of Ruchika High School in the city rued the decision of offline exams from February 15. “We were given notice on January 21 about the exam, though the office had earlier said that it would be held at the end of March,” said a student, requesting anonymity.

According to sources in the school, the decision to conduct the exam early was taken to allow students enough time to prepare for Class X board exams.

“If this is a formality, I would suggest that the school conducts the exam online and not put so much stress on the students. It is a known fact that the pandemic has affected studies and online classes are not enough to prepare students for any type of exam,” said another parent.

Despite repeated attempts, there was no response from principal Leena Khurana.

St Joseph’s High School in Bhubaneswar, on the other hand, has started physical classes and informed students about possible exam dates — February 22/26.

A teacher of the school said that students are being prepared for the exams, which will be conducted in offline mode. There has been no complaints from the students in this regard so far, she added.