Bhubaneswar: The Rourkela-based Biju Patnaik Technical University (BPUT) has assigned a private firm with a dubious track record to conduct online exams for the final semester for around 25,000 students in various courses.

BPUT’s Director of Examinations, Dr Deepak Kumar Sahoo, confirmed that the Hyderabad-based Coempt Eduteck Private Limited, earlier known as Globe Arena, has been the varsity’s examination partner since 2015 and it will provide online exam services this year.

Even though the university had earlier suspended all examinations in the 137 colleges affiliated to it due to the COVID-19 pandemic, the Odisha government decided to conduct multiple-choice type online exams for final semester students. This was because the majority of these students will need degrees for pursuing higher studies or for joining their workplaces.

“The state government has decided to give an opportunity to final-year students keeping prospective jobs or further studies in mind. Home computer-based online open book examinations with innovative outcome-based questions will be conducted for final year students. Those who cannot appear in these exams can opt for offline exams to be conducted in a regular manner as and when the colleges reopen,” Dr Sahoo was quoted as saying by NewsClick.

He further informed that the university has identified examination centres in various districts for students who cannot appear in the tests from their homes.

According to sources, the Hyderabad-based Globe Arena, which had changed its name to Coempt Eduteck Private Limited last year, was blacklisted by the Telangana government for goofing up in an exam-related service outsourced to it in 2019.

The company was hired by the Telangana State Board of Intermediate Education to conduct exam enrolment and for processing results for Classes X and XII students.

Approximately three lakh of the around nine lakh students who appeared in the examinations from Telangana had failed. It led to a spate of suicides by students who felt they had been wrongly assessed. Re-evaluations of certain answer sheets revealed gross errors by the private firm.

Subsequently, Globe Arena was booked by Telangana police and also dragged to court for its lapses.

Now this controversial firm is in charge of conducting the final semester exams for BPUT through “Artificial Intelligence Proctored Platform along with Manual Proctoring (Supervisor/Invigilation)”. BPUT had issued a notification in this regard on June 27. 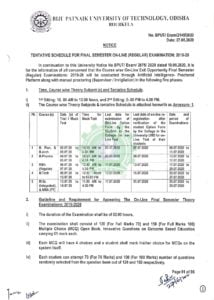 The online exams were announced despite students clamouring for final semester results to be declared through a “normalisation” process in light of the COVID-19 pandemic. ‘Normalisation’ is where students’ performances are evaluated by calculating the average marks obtained in previous semesters, along with marks secured in internal assessments in the last semester.

Students who will appear for the examinations are enrolled in courses including engineering, architecture, pharmacy and business administration. The online examination process will kick off from July 1 with the launch of trial and mock tests for Principals and teachers in-charge of all affiliated and constituent colleges of BPUT.

However, students have launched a social media campaign titled #BPUTStopKaroNa in a bid to convince the university authorities to cancel the exams.

The students have argued that a number of their batch-mates had even left their books behind while vacating the hostels at short notice following the lockdown announcement. The lack of books, the students said, will not help them in an open-book examination system, adding to the fact that they are not well-versed with the multiple-choice format.

Punjab To Suspend All University And College Exams