Bhubaneswar: Piyush Chanduka has topped in BTech course and Laxmi Priya Senapati in BPharm in the Odisha Joint Entrance Examination (OJEE) whose results were declared on Wednesday evening.

Of 49,360 candidates who appeared at the test, 49,279 have been allotted ranks. They can download their rank cards from the official website ojee.nic.in. 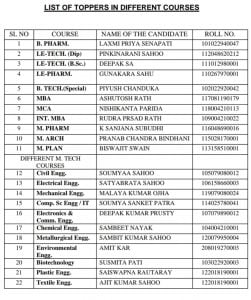 The entrance examination was conducted on Computer Based Test (CBT) mode for all the courses from September 6 to September 18. For the first time, 57 test centres were set up in all the 30 districts of Odisha as well as three cities outside state – Kolkata, Ranchi and Patna. The test scheduled to be held in June was postponed in view of COVID pandemic.

Minister of Skill Development and Technical Education declared the results of OJEE – 2021 and released the Results Booklet in the presence of the Principal Secretary, Additional Secretary, Joint Secretary of SDTE department, chairman and secretary of OJEE and others.

NEET-PG Counselling Not To Begin Till Supreme Court Ruling On Quotas: Centre

Foreign Students To Get PhD Admission Only If Seats Are Left Vacant, Says JNU